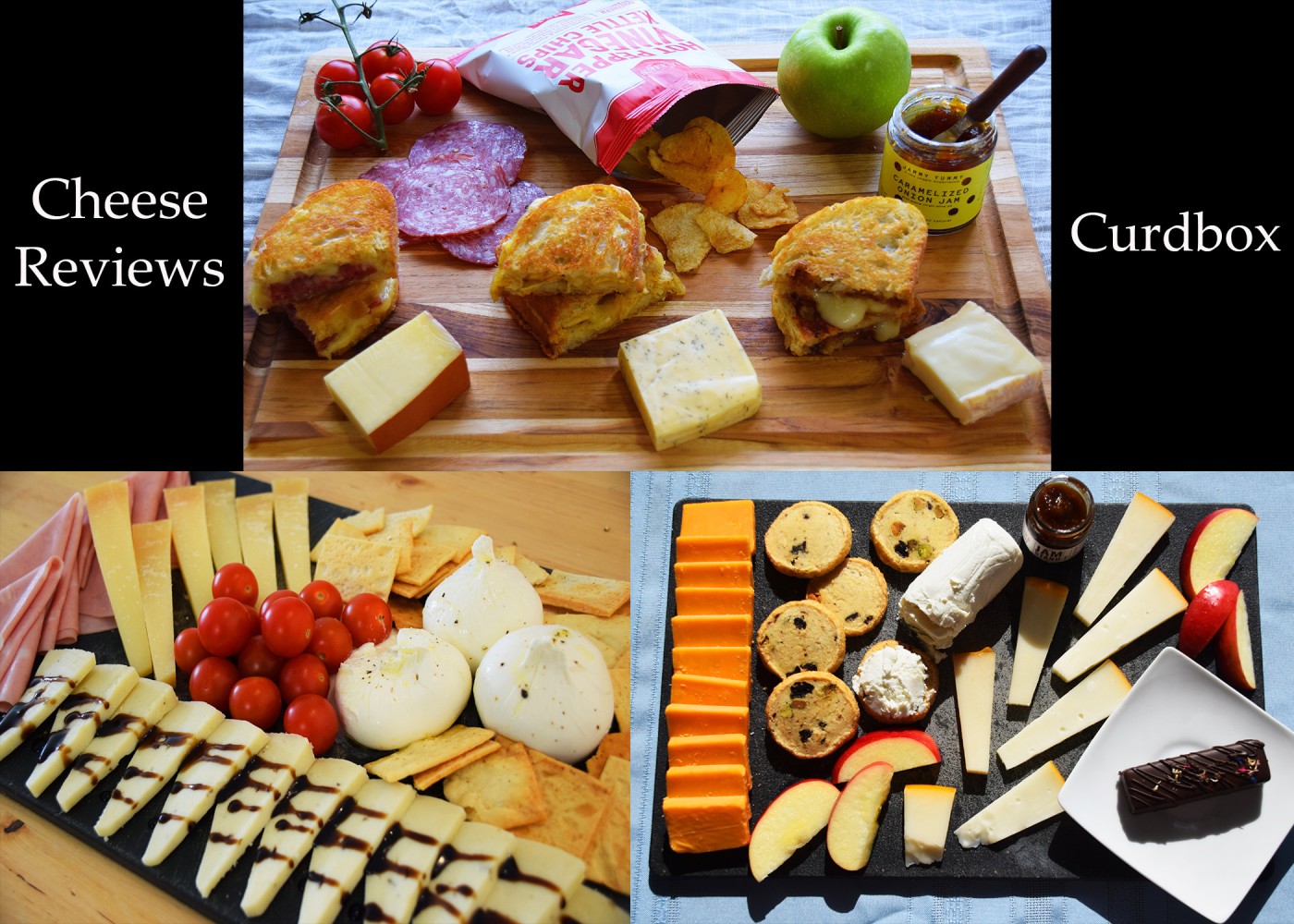 In the middle of the pandemic last year, I had to move apartments with my spouse.

On the plus side, the rent is significantly cheaper, the windows are big and let in lots of light, and my complex is surrounded by trees.

On the downside, you need a car to get anywhere and any easy access I had to local cheese shops and artisan cheese went down the drain.

So what do you do when you don’t live near any cheese shops, don’t like to drive, and can’t go out much because there’s a pandemic?

You join monthly cheese delivery subscriptions! I thought this would be a fun way to still get cheese in my life and support local(ish) businesses. For this one, we’re gonna start in Massachusetts with the Curdbox from the Curds & Co. cheese shop in Brookline.

I am not affiliated with any of the companies, producers, or products in this review. I just like reviewing cheese.

The Curdbox experience is all about cheeses and their pairings, plus a little bit of education on the side. On the third Wednesday or Thursday of each month you receive a box of three cheeses and three pairing items, each built around a different theme; you also receive a card detailing information about the cheeses and pairing items, who makes the products, and pairing suggestions, plus a link to a blog post or two, a podcast, and a Spotify playlist to enhance the experience.

It’s a little overwhelming, to be honest. The first time I got a Curdbox I misread the suggested pairings on the info card because the design was a little difficult to understand at initial glance. I still ate the pairings though.

As an ex-cheesemonger I did appreciate the time and effort taken to talk about the producers. Part of the story of artisan cheeses and their related products is who makes it, how, where, and sometimes why! I even recognized a few makers because I used to sell some of their products. It was a nice throwback.

If you’ve read this far, you’re probably wondering what I got in my Curdbox. Let’s unpack that!

What I Got in Each Box

I subscribed for about three months to see what kind of variety I would get in each box. The cheeses all came in anywhere from ¼ lb to nearly ½ lb portions, though it was usually closer on average to ⅓ lb per piece of cheese. Each Curdbox was themed and came with a variety of soft and hard cheeses. (I never got any blue cheese, so make of that what you will, blue cheese lovers.)

Each of the pairings was in a conveniently small amount—this is perfect because there’s very little waste after you finish your cheeseboard and I love tiny bottles and jars!

Speaking of cheeseboard, each box serves enough for two people for a light lunch or one very hungry person. I admittedly added some extras from home to each cheeseboard to stretch the amount of food.

Here’s a summary of my experience with each box:

This particular Curdbox was inspired by the Little Italy section of Boston and won me over in the first box! I am a big sucker for meals consisting of lots of little bits, like antipasti, tapas, and meze.

For the Italian cheeses we got: burratina by Calabro, which are little pouches of mozzarella cheese filled with shredded mozzarella and cultured cream; Brigante with rosemary by Pinna, a pasteurized sheep’s milk cheese filled with chopped rosemary that has a springy, creamy texture and rich, aromatic flavor; and Gran Biraghi by Biraghi, a firm aged cow’s milk cheese that reminded me of a savory, fruity parmesan with a smoother texture.

I ended up pairing the burratina with Garlic Crostini, little garlic flavored bread crisps, by Isola Imports. It was good, but I would have preferred more garlic in my crostini. The mild creaminess of the burratina drowned out the flavor.

For the Brigante, I drizzled some Pomegranate Balsamic Vinegar by Sutter Buttes over slices and WOW.

The BEST pairing and the star of the cheeseboard. It was a near-perfect bite, a balance of sweet, savory, and slightly sour that almost felt like dessert. 10/10 would absolutely eat again.

The Gran Biraghi? I ended up eating it with some mortadella with pistachios by Veroni. I didn’t think I liked mortadella, but this changed my mind. Thanks Curdbox! The pairing itself was fine but arguably the weakest on the board (though to be fair it had some hard competition).

I added some cherry tomatoes to the board for color and nutrition to make it more of a meal, though I will also say that a burratina pouch, some crostini, a drizzle of that fancy balsamic vinegar, and a clementine make a heavenly little breakfast.

It was all about sweet flavors. I’m more of a savory person when it comes to cheese, but the cheeses and pairings were still pretty good.

In the cheese section I got Clover Blossom Honey Chèvre from beloved Vermont Creamery, a soft and spreadable goat’s milk cheese with bright, slightly acidic, and sweet notes from the clover honey; Mature Raw Milk Gouda by Marieke Gouda, a sharp gouda with a mild sweetness, a creamy mouthfeel, and toothsome texture; and Hook’s 3-year Cheddar by Hook’s Cheese Company, an extremely sharp and salty firm cheese.

My favorite pairings were the cheddar with Fig-Tamarind Jam by The Jam Stand and the goat chèvre with Pistachio Cherry Sablés by Lark Fine Foods.

The cheddar with the fig and tamarind jam was pretty good; the sweetness and sourness of the jam deftly countered the saltiness of the cheese and complemented the acid notes in the cheddar. The jam was so good my spouse and I ate it with breakfast the next day.

Honey goat cheese with pistachio cherry cookies? My favorite, hands down. I’m actually not a fan of fresh goat cheese—I find they have animal and barn musks I don’t like—but the flavor was gentle enough and it went so well with the sablés I just wanted to make cookie sandwiches. The sweet cheese complemented the sweetness of the cookies, while the creamy cheese and dry, crumbly sablés had perfect contrasted textures. You heard it here first, folks, whipped goat cheese sandwich cookies should be a new trend.

There was a third pairing, a dark chocolate truffle bar from Chocolate Therapy, but like the gouda I preferred eating it by itself. Neither item had a standout combination for me.

Overall I found this box okay, but didn’t like it as much as the first one.

To preface, I am a huge fan of grilled cheese sandwiches; I even helped create the grilled cheese menu at the cheese shop where I worked. Imagine my joy when the theme of April’s Curdbox was #SandwichGoals, a collaboration with Mackenzie Smith of Grilled Cheese Social!

The cheeses chosen for this month were Italian Fontal from Mitica, a springier, gentler cousin of Fontina Val d’Aosta; dill havarti by Roth Cheese, a mild cheese filled with slightly overpowering dill; and Taleggio DOP from Arrigoni, a creamy soft Italian cheese with buttery and funky flavors. Every single one of these melts like a dream.

While the cheeses and pairings can be eaten on their own, I obviously had to try making the grilled cheeses from the included recipe card.

For the first grilled cheese I combined the Fontal with Napoli Salami by Olli Salumeria. I was afraid that the salami amount on the recipe card would be too much but actually…it wasn’t. It was a perfect combination of salty, creamy, umami, and savory, and paired perfectly with cherry tomatoes for a sweet and tangy palate cleanser. This was my favorite grilled cheese out of the three I made and I would make it again if I could.

My second favorite grilled cheese was the Taleggio with Onion Jam by Jammy Yummy. I love sweet and savory onion jam, though it overpowered the Taleggio in the grilled cheese ever so slightly. Nibbling on Granny Smith apples in between bites made for a delightful little meal. (We ate the rest of the onion jam later.)

My third favorite grilled cheese had the dill havarti and Hot Pepper Vinegar Kettle Chips by Lillie’s Q. I can see how in theory this sandwich was supposed to be good, but the dill havarti completely overpowered the spicy tang of the chips. The chips added a nice crunch and were delicious on their own! It was a shame to have the dill mask the flavor. I’ll admit I may have added too much cheese and not enough chips, but having the chips on the side definitely helped.

This was probably my favorite box overall.

The current base price of a Curdbox is $49.95 a month plus shipping, which is calculated separately and varies depending on where you live in the United States (sorry, non-U.S. folks). You can pay monthly or pay for several months in advance, which makes shipping less expensive.

I personally thought the price was good and the flexibility convenient. I paid less than $200 for 3 months—cheese subscriptions can get pretty expensive, due to the cost of the products themselves, the labor in assembling the boxes, and the speedy shipping necessary to keep the cheese intact!

For the price you pay there’s a fair amount of food and content, so consider it for a gift pick if you want something nice that’s not too expensive.

Final Thoughts on the Curdbox

I would definitely recommend this for a small household on a budget or as a gift for a foodie. The pairings and cheeses are approachable, and if you’re new to the cheese world the Curdbox comes with a ton of educational resources.

If you’re already deep into the artisan cheese world, especially in the New England area, you’ll probably already be familiar with a lot of the products or producers or even the pairings. I’m not sure how much you’d get out of it.

The only thing I wasn’t a real fan of was the podcast, but I don’t really listen to podcasts. Forgetting about the podcasts and Spotify playlists didn’t impede my enjoyment of the subscription so I think it turned out great!

If you’d like to learn more and see the previous box themes, check out the Curdbox archives or go to the links I’ve included in each month’s description.

Would you consider getting a Curdbox subscription based off this review? Leave a comment and let me know!

We all love our artisan cheeses, but what do most consumers know about the farmworkers getting the milk for that cheese? I highly encourage you to check out the Milk with Dignity Program, which allows farmworkers to collectively bargain for fair wages and humane working conditions, as well as hold companies and farmers responsible for the wellbeing of their workers. The farmworkers who produce our food deserve payment for their work and to have their human rights honored!

Since I had to move last summer when were still figuring out COVID-19'S workings and a vaccine wasn't yet on the horizon (I was a fun ball of nerves then), I lost access to a lot of my cool/favorite cheese places.
I don't usually share GoFundMe pages, but a friend of mine could really use your help. My friend Connie and her partner Kevin got in a nasty car accident after the tire on Connie's new car blew out.
No special update, just really enjoyed this salad and wanted to share. Fried halloumi cheese, local strawberries, candied walnuts, mint, scallions, spinach, romaine, all drizzled with pomegranate balsamic vinegar and extra virgin olive oil.
So this was supposed to go up earlier but got put off due to health and tech crises.
This project turned into a deeper dive than I originally anticipated but it was SO much fun.
After a bit of a break, we're slowly easing our way back into this blogging thing.⁠